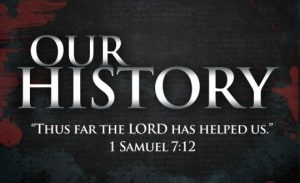 Lehigh Baptist Church began as a Mission in North Philadelphia on January 7, 1880. In 1881 the Mission was organized as Lehigh Avenue Baptist Church. The cornerstone was laid on July 11, 1881. The Mission became a fully organized church on June 6, 1882 with 44 members.

Rev. Myron Cedarhom began his ministry at Lehigh on April 1, 1943. It was during his tenure as pastor that Lehigh became a charter member of the Conservative Baptist Association.

In 1950 Rev. Joseph Muggleworth began his ministry at Lehigh. In 1955 the Church voted to relocate. Five and one half acres were purchased at Welsh Road and Alburger Avenue. A ground breaking service was conducted on February 3, 1957 with five inches of snow covering the ground. A large sign was erected on the grounds announcing the future site of the church. In the summer of 1957 a large tent was pitched on the site where Daily Vacation Bible School and Evening Services were conducted. A bus was purchased to bring the members to the new area.

On January 31, 1982, after 32 faithful years, Pastor and Mrs. Joseph Muggleworth retired to their home in North Cape May.

August 1, 1986 Rev. Harry E. Chatburn accepted the call to lead Lehigh and continued until his retirement in May of 2014. He served the Lord with gladness – tirelessly, faithfully, and with great compassion for His flock. His investment in the lives of others truly made a difference; he gave hope and encouragement to so many. Now, as the day dawns on the next chapter in his life, we will continue to pray that God continues to bless Pastor Chatburn and watch over him.

Pastor Robert Joka was our pastor from May 2014 until November 2015. May the Lord bless and watch over him and his family.

Pastor Chatburn returned to Lehigh Baptist in November of 2015 and diligently led us in serving the Lord until June of 2022. We pray God will lead and guide him on his next journey of his life. Thank you for being our pastor for so many years and for being so honest and true to God’s word.